Episode 1: A Stranger from Troy

Home » Return From Troy » Episode 1: A Stranger from Troy

Episode 1: A Stranger from Troy

Hermes, messenger of the gods, appears before Prince Paris, youngest son of the king of Troy. Great father Zeus commands Paris to choose the most beautiful of the three goddesses and give her a golden apple. Three goddesses stand naked before Paris and make their offers. Hera, the queen of heaven and wife of Zeus, says Paris will be a great king over the whole of Asia and the whole of Europe if he chooses her. Athene, goddess of war and wisdom, promises Paris he will never lose a battle and be famous for his cleverness and wisdom. Aphrodite, goddess of love, says she will give him the most beautiful woman in the world — Helen, wife of Menelaus, king of the Greek city of Sparta. Paris chooses Aphrodite and Aphrodite’s arrows cause Paris and Helen to fall in love and Paris to steal Helen from her husband. The Greek army, supported by the furious Hera and Athene, lays siege to Troy during a bloody ten-year war. Finally the victorious Greek kings, Agamemnon, Menelaus and Odysseus, set sail for home with their treasures.

Food for the soul

Nine years later an old man, a stranger, is found on an island beach by the daughter of Alcinous, the king of that island. The stranger is taken to the feasting hall, welcomed and cared for. The king’s storyteller, Demodocus, begins to entertain the company with his story of the siege of Troy. The stranger weeps and reveals his name. It is Odysseus.

A performance poem: This activity results in composing and performing a group poem to show others.

Use the two accounts of war as starting points. (Working as a class, compose a poem and/or develop a performance.) Perhaps place these different views of war side by side. For the verses use the words of the storyteller, “Ten years of war…” as a scaffold. Begin with his words from the recording; add further lines, composed by learners, showing his weariness and sorrow. Create several verses. They could be the voices of different soldiers. For the chorus perhaps use the words of Demodocus as a starting point. Tell of heroes; glorious actions; excitement; energy. (Together plan and deliver the performance. Share ideas about the use of voice, grouping, positioning and sound.)

The head of Odysseus — photograph

A bust of Odysseus situated in the town square of Stavros on the Greek island of Ithaca, erected in 1953
Odysseus appears here as a thin, lean yet strong figure, looking firmly into the distance - perhaps out to sea or over his kingdom. The curls in his hair, beard and moustache suggest the water and the waves that characterise Odysseus’ life and separate Troy from Ithaca, where this bust stands. He appears fit and well, dressed in a chiton (tunic). Is this the Odysseus who has returned from war in Troy and years of travelling, or a younger man yet to set out on his voyages? 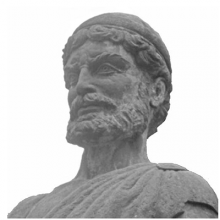 The head of Odysseus — line drawing

Based on a fragment of a marble statue from the Grotto of Tiberius at Sperlonga, Italy, Mid-1st century AD, Roman copy of a Greek original
Representations of Odysseus in ancient art vary considerably, from a young warrior to a bearded, tired older man. In this line drawing we see the same watery features of the photograph of the bust (preceding page), but much more pronounced. His hair, moustache and beard almost flow into one and appear more unkempt than they do on the bust. Odysseus wears a heavy, warm cloak, perhaps suggesting that the scene is set in the night or during the winter. Is Odysseus at home in this image, or on his journey? 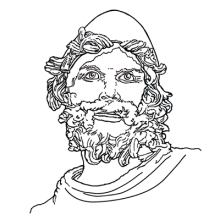 The judgement of Paris

Based on a vase from Vulci, c. 520 BC, British Museum, London
On the right we can see Paris, ready to choose the winner of the golden apple. He is holding a lyre (linking him perhaps to Apollo, god of music as well as archery, and the protector of Troy). On his left stands Hermes, the messenger of the gods, who can be recognised by his staff, traveller’s hat and winged sandals. Hermes looks as though he is introducing to Paris the three goddesses on his left. Of the goddesses only Athene can be identified, by her snake-trimmed aegis (breastplate) and helmet; the other two are Hera and Aphrodite.

Suggested activities
Work out from our telling of the story the exact point that is illustrated here. It is just before the promises are made and the apple is given. We know this because the goddesses still have their clothes on and Hermes has not yet disappeared.

Work out which character is which and label them. Add information which helped you to decide.

This is the first opportunity to look at the clothing and hair of the ancient Greek characters. Add to the picture items mentioned in the story: Aphrodite’s belt of desire, the bow and quiver full of arrows which Paris was carrying — and the golden apple. Where is it and who has it?

Use thought bubbles to show the promises each goddess is planning to make.

Think about drawing in a background. We are told of great mountains.

This illustration with its decorative border would work well cut out and joined to make a vase shape. 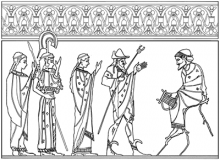 Based on an Attic red figure neck amphora attributed to the Nausicaa painter, c. 450-440 BC, Antikensammlungen Museum and Glyptothek, Munich
A naked, wrecked Odysseus (far left) meets the daughter of King Alcinous, Nausicaa, (third from the left) and her maids at the river where they went to wash their clothes. Terrified at the sight of him, one of the girls is running away. Nausicaa would have done the same (as her posture indicates) if goddess Athene (second from left) had not encouraged her to stay and confront the stranger.

Suggested activities
This picture gives us extra information which we have not heard in the recording and which can be investigated.

Can they recognise Athene from features they have seen in the previous illustration? What about Odysseus? How does he look different? Note that he is older and had suffered at this point in the story.

The maidens are by the river doing washing. Look to see cloth being twisted and wrung out and hanging to dry on a tree — very fortunate for Odysseus who can use the cloth to cover his nakedness.

Odysseus weeps to the sound of Demodocus’ song

Based on L’Odyssée d'Homère gravée par Reveil d'après les compositions de John Flaxman (Paris, 1835)
While at Alcinous’ palace, the bard Demodocus plays his lyre and sings about the sack of Troy and the Trojan Horse. At the sound of Demodocus’ song, the hero cannot hold his tears and tries to hide them by burying his face in his cloak. When King Alcinous hears his sobs, he asks Demodocus to stop.

Suggested activities
We have been told that Demodocus “lifted his lyre to his shoulder”. This illustration makes it clear that the story was sung rather than spoken. Remind them of Paris’ lyre which they have seen in the illustration The judgement of Paris (above).

This artist shows details of footstools and sandals. So far we have seen bare feet.

Compare the composition of this illustration with the last two. It is not from a vase and is intended to be viewed flat from one point only. The figures face and look at one another. Parts of illustrations from vases on the other hand are not seen all at once and the artist needs to create a composition that looks good from any point.